Congratulations and a mighty woo-HOO to Kathy MacMillan for today’s release of her debut young adult novel, SWORD AND VERSE! (HarperTeen, 2016.) 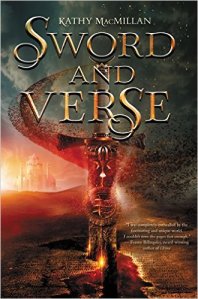 Raisa was just a child when she was sold into slavery in the kingdom of Qilara. Despite her young age, her father had been adamant that she learn to read and write. But where she now lives, literacy is a capital offense for all but the nobility. The written language is closely protected, and only the King, Prince, Tutor, and Tutor-in-training are allowed to learn its very highest form. So when she is plucked from her menial labor and selected to replace the last Tutor-in-training who was executed, Raisa knows that betraying any hint of her past could mean death.

Keeping her secret guarded is hard enough, but the romance that’s been blossoming between her and Prince Mati isn’t helping matters. Then Raisa is approached by the Resistance—an underground rebel army—to help liberate the city’s slaves. She wants to free her people, but that would mean aiding a war against Mati. As Raisa struggles with what to do, she discovers a secret that the Qilarites have been hiding for centuries—one that, if uncovered, could bring the kingdom to its knees.

“I was completely enthralled by the fascinating and unique world that Kathy MacMillan has created.  The depth and skill she demonstrates with her ability to build an original mythology based on words and the power of language are highly unusual for a first-time novelist and I couldn’t turn the pages fast enough.” – National Book Award finalist Franny Billingsley

“A tense, romantic fantasy epic about prejudice, political struggle, and the power of words, SWORD AND VERSE kept me guessing at every turn. Kathy MacMillan is a writer to watch.” — R.J. Anderson, Andre Norton Award-nominated author of Ultraviolet

“Literacy becomes the key to liberation in a thoughtful debut fantasy.” — Kirkus Reviews

Congratulations again, Kathy! What inspired you to become a writer?

I’d written stories and poems since I was a kid, but writing was always something I just did for fun. In the early 2000s, I started writing fan fiction, mostly in the Harry Potter fandom. Again, it was all just for fun. But writing fan fiction turned out to be fantastic practice for writing original fiction, and that is what lit the spark. (And by the way, I’m excited to share the lessons I learned from writing fan fiction at my breakout session, “Taking Off the Training Wheels,” at the SCBWI MD/DE/WV Conference in March!)

Can you tell us a little about your road to publication?

I’d been steadily submitting to agents since 2002, and had racked up lots of rejections. Sword and Verse was the fourth novel I submitted to various agents. In 2008, Lindsay Davis at Writers House responded to a query and said she’d like to work with me on a revision. Then, several months later, she moved out of the country and Steven Malk, the senior agent with whom she had been working, took over. Steven represents so many amazing authors and illustrators – I never would have had the guts to query him directly. (Though he tells me that’s ridiculous.) Between 2009 and 2013, we did about five major rounds of revision before submitting to publishers. Sword and Verse will be published seven years and six days after my first email from Lindsay, and over ten years after the first draft was written!

Seeing as how hindsight is always 20/20, what would you have done differently?

I wouldn’t have beaten myself up about how long it was taking. It takes the time it takes, and it’s so hard not to get wrapped up in comparing yourself to other people.

How were you inspired to write SWORD AND VERSE?

Many years ago, I was researching ancient libraries for an article on book burning, and I came across a reference to ancient libraries composed entirely of letters. In the margins of my notes, I scribbled “What if the letters were all written to the gods?” And the Library of the Gods was born. The story went through many iterations over the years; in fact, there are only about three scenes in the final book that look anything like the first draft. But it has always been about the question of who controls knowledge.

What kind of book research did you do?

I did a lot of research about ancient cultures and the history of different kinds of scripts. There are three different writing systems that play an important role in the story, and I developed them pretty in-depth.

Do you have a favorite line from this book?

This is always a hard one for me to answer, because so many of my favorite lines depend on context and don’t really have the same impact as an isolated quote. But I will go with a line from Raisa’s heart-verse that I think sums up the theme of the book pretty well: “When light and heart and hand be one, then may wisdom’s work be done.”

You are the founder of The Sweet Sixteens, a group of Young Adult and Middle Grade authors debuting in 2016. How has being part of the group helped you?

I can’t imagine having done this without the support of The Sweet Sixteens! So much of the year before your debut involves waiting and wondering if you are the only one who is frustrated/puzzled/annoyed with various new experiences. In our group, we have a private forum for commiserating and celebrating together, and we support each other’s book on social media and in live appearances. We’ve also passed around advance reader copies of our books so we can hype each other’s books online. Having the group’s support has meant so much to me, especially because I don’t have a lot of writing people in my everyday life.

What do you enjoy doing while not writing?

Camping, hanging out with my son, catching up on my never-ending to-be-read pile.

Tell us something personal about you people may be surprised to know.

I have a tattoo of a quill on my lower back, and three of my friends have matching ones.

Nice! What are you working on now?

I am working on the sequel to Sword and Verse, which picks the story up from Soraya’s point of view. There are still plenty of challenges left for the council to face, not least of which is learning to trust each other, and the consequences of decisions made in Sword and Verse come back to haunt them.

If you could sum up your best advice for new writers in only four words, what would they be?

Never ever give up!

Great advice, Kathy, thanks for stopping by and best of luck with SWORD AND VERSE!

Don’t forget – today is the last day to register for Kathy’s ABC Event this Thursday! Please RSVP at http://mddewv.scbwi.org/: From first draft to final copy, a novel goes through many stages of change.  Join Kathy and Manuela Bernardi, betareader for Sword and Verse, for a frank discussion of feedback and how it shapes the revision process.  Copies of the book will be available for purchase and signing after the program.  This program is co-sponsored by Baltimore County Public Library and the Society of Children’s Book Writers and Illustrators MD/DE/WV Region.

Kathy MacMillan is a writer, American Sign Language interpreter, consultant, librarian, signing storyteller, and avowed Hufflepuff. Her debut young adult novel, Sword and Verse, explores questions of power and prejudice in an epic fantasy setting, and has been called “fascinating and unique” by National Book Award finalist Franny Billingsley. Kathy is the founder of The Sweet Sixteens (www.thesweet16s.com) debut group of 2016 middle grade and young adult authors, and serves as the Published and Listed Member Coordinator for the Maryland/Delaware/West Virginia Region of the Society for Children’s Book Writers and Illustrators. She is also the author of eight resource books for educators, librarians, and parents, including Little Hands and Big Hands: Children and Adults Signing Together (Huron Street Press, 2013). She lives near Baltimore, MD with her husband, son, and a cat named Pancake. Find her online at www.kathymacmillan.com or on Twitter at @kathys_quill.

Laura is a writer, runner, reader, runDisney addict, blogger/vlogger at Write, Run, Rejoice and Joyful Miles, mom of two awesome boys, wife of one fantastic husband, excellent chili maker, and obsessive list keeper. She loves run-on sentences and adverbs. She also still thinks Spice World was an awesome movie and feels no shame about that.
View all posts by Laura Bowers →
This entry was posted in Book Talk, Member News and tagged harperteen, kathy macmillan, Sword and Verse. Bookmark the permalink.