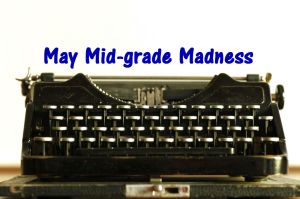 First off, major thanks to Kara Laughlin who did an AMAZING job coordinating this year’s May Midgrade Madness challenge! Seriously, if you want to get some great plotting advice, go check out our MMM Facebook page. She was posting something amazing nearly every day in May!

And I’m thrilled to announce that we had TWO AMAZING FINISHERS, who completed the challenge by writing over 20,000 words in a 72 hour period!

Congratulations and a mighty woo-HOO to Kara Laughlin and Janet Macreery! You ladies kicked some serious word count. Even Buddy thinks so: 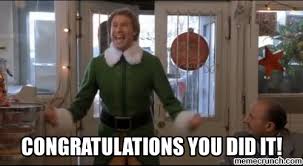 We also want to send out a major congrats to Karin Goodwin for writing over 7,000 words which–oh yeah–is pretty dang awesome as well! And, Karin reported that she’s loving her own story again which is putting Buddy through the roof!

Now, there are some people who didn’t finish … or even start, *cough, Laura Bowers, cough* but it was unrealistic for me with a novel to rewrite, my kid’s surgery to get ready for, and a different reason which I will discuss in an upcoming post.

Enough of that. Back to our super awesome finishers!

In our earlier posts, we mentioned how a grand prize winner selected from the challenge finishers will receive … dum, dum, dum, DUM …

A free, 20-page critique from Kate Angelella, the fabulous freelance editor who spoke at our March conference! Formerly of Simon & Schuster, Kate is an experienced children’s book writer and editor who offers in-depth, honest, and compassionate critiques.

(She also gave one kick-butt presentation about revising, which makes me seriously want to kick my own rear for not finishing the challenge.)

But it’s cool, for those who did not tackle the challenge, Kate is available for freelance editing! You can go here for more information.

And the winner is … Janet Macreery!!

Congratulations, Janet, we can’t wait to hear how your critique goes! And many, many thanks, Kate, for your generous prize!

Kara and Karin aren’t walking away empty-handed, though. Because we had several PAL graciously stepping up to the plate as well, Kara will be receiving a critique from …

Manami and her family are forced to leave their island home and sent to a Japanese internment camp in 1942. While there, it is up to Manami to find the strength to keep her family together.

Lois is also a member of The Sweet Sixteens, a group of young adult and mid-grade debut authors with books coming out in 2016. So is Kathy MacMillan, our lovely PAL coordinator, whose debut young adult fantasy novel, Sword and Verse, comes out next winter! She also volunteered to critique as well.

[ETA: In my initial post, I had mistakenly switched our awarded critiques. My apologies!]

Also, for her awesome efforts, we are bending the rules a tad by awarding Karin a critique as well with…

Ronald L. Smith, author of the mid-grade HOODOO, which will be releasing on September 1, 2015!

Twelve-year-old Hoodoo Hatcher was born into a family with a rich tradition of practicing folk magic: hoodoo, as most people call it. But even though his name is Hoodoo, he can’t seem to cast a simple spell.

When a mysterious man called the Stranger comes to town, Hoodoo starts dreaming of the dead rising from their graves. Even worse, he soon learns the Stranger is looking for a boy. Not just any boy. A boy named Hoodoo. The entire town is at risk from the Stranger’s black magic, and only Hoodoo can defeat him. He’ll just need to learn how to conjure first.

Set amid the swamps, red soil, and sweltering heat of small town Alabama in the 1930s, Hoodoo is infused with a big dose of creepiness leavened with gentle humor.

Major thanks to Ronald, Lois, and Kathy and congrats again to everyone who participated!

Now … are we doing this again next year?

We will be doing May Midgrade Madness in 2016 but next time, we will start announcing it much sooner, giving participants more time to prepare. So keep this in mind when you’re planning your writing schedule next year!

Happy writing and drawing, everyone!

Laura is a writer, runner, reader, runDisney addict, blogger/vlogger at Write, Run, Rejoice and Joyful Miles, mom of two awesome boys, wife of one fantastic husband, excellent chili maker, and obsessive list keeper. She loves run-on sentences and adverbs. She also still thinks Spice World was an awesome movie and feels no shame about that.
View all posts by Laura Bowers →
This entry was posted in May Midgrade Madness and tagged Kate Angelella, May Midgrade Madness. Bookmark the permalink.