Congratulations and a super mighty woo-HOO for regional member Laura Gehl for this Tuesday’s release of One Big Pair of Underwear! 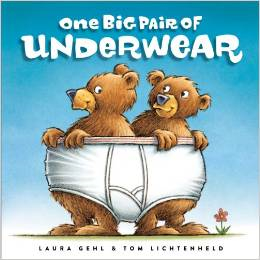 Count and share with…underwear! Come along on a zany adventure with hilarious pictures from the New York Times bestselling illustrator of Goodnight, Goodnight, Construction Site.

What’s one thing that two bears, three yaks, four goats, and six cats have in common?

But look out—here comes a pack of twenty pigs ready to prove that sharing makes everything twice as fun!

“Gehl’s debut picture-book text is a silly romp of a counting book with a lesson in sharing to boot … A picture book to count on for delightful shared reading.” Kirkus Reviews

“… Gehl’s tongue-twisting rhymes bounce along winningly, and Lichtenheld (This Is a Moose) gamely pictures the silly activities, from water-skiing cows and scooter-riding seals to twin bears stuffed into a single pair of Y-fronts. This amusing tale of sharing eschews the preachy and relies on nonsense to get readers giggling.” Publisher’s Weekly

“Take one counting book, mix it with a comical tale of underwear-sharing, add some tongue-twisting rhymes, and soon there will be uncontrollable laughter. … The final exuberant parade, and the quietly amusing endpapers, ensure that this will be a popular book for storyhours and independent reading alike. Who knew sharing could be so much fun?” Horn Book

Laura’s debut of One Big Pair of Underwear is the first of five … yes, FIVE … picture books to be released in the next two years!

In 2015, she has two books coming out in February both with Kar Ben Publishing (Lerner):

And Then Another Sheep Turned Up illustrated by Amy Adele: This year, it will just be Mama, Papa, Hannah, and Noah for the Passover seder, with no extra guests.  Until Hannah hears a knock at the door…and another…and another….

and Hare and Tortoise Race Across Israel illustrated by Sarah Goodreau: Hare is sooo much faster than his best friend Tortoise.  And he is ready to prove it, in a race all the way from Tel Aviv to the Dead Sea.

Say it with me folks.

Laura will be joining us in November as part of her blog tour where she’ll talk about picture books and her process. Until then, you can connect with Laura at her website or Facebook page. Again, a big congratulations, Laura for One Big Pair of Underwear and your other accomplishments!

Happy writing and drawing, everyone! 🙂

Laura is a writer, runner, reader, runDisney addict, blogger/vlogger at Write, Run, Rejoice and Joyful Miles, mom of two awesome boys, wife of one fantastic husband, excellent chili maker, and obsessive list keeper. She loves run-on sentences and adverbs. She also still thinks Spice World was an awesome movie and feels no shame about that.
View all posts by Laura Bowers →
This entry was posted in Member News and tagged beach lane books, laura gehl, one big pair of underwear, scbwi. Bookmark the permalink.